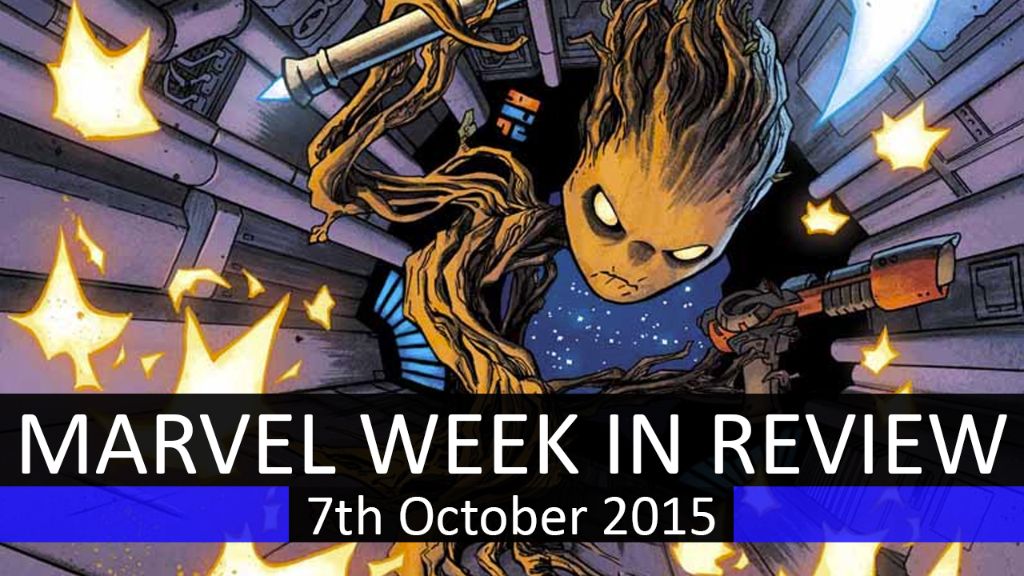 This was one of the titles in the Secret Wars side stories that I was not expecting to enjoy but really did, I seem to have a like for anything that reimagined mainstream characters in different themes – this one is fantasy/historic – I think this was the last book in the run and was a good wrap up

Skip these they are completely pointless, simply enhanced marketing for other comics.

Considering this comic series is basically a spin-off from a mobile game, I did not go in with massively high expectations for it. However was actually pleasantly surprised by it and think as a #1 issue it shows potential for the series.

Another very good #1 issue that helps fill in new readers on who Doctor Strange is and what to expect out of this series. As always the art is great, very different from what you see in other Avengers solo titles. Looks like the first main arch could be interesting as well so lets see how it goes.

Wrapping up the mini-arch for his solo title, Groot is finally reunited with Rocket and the rest of his companions and proves in the process that despite being a big softy at heart – when needed his is more than capable of opening a can of whoop-ass on those deserving of it. A solid end that leads in well to the upcoming Rocket Racoon & Groot series.

It is a shame that Marvel had to rush out the new run on all the Secret Wars story had wrapped up. As much as they promised there would be no spoilers, there were always bound to be some – but the one in this is potentially a doozy.

That aside this is a solid start to the new run on Iron Man that manages to very quickly throw a few balls into the air that the writers will be able to play with ongoing without seeming overly ham-fisted about it. I am intrigued to see which one it runs with first.

An incredible wrap up of the Old Man Logan series for Secret Wars, his journey through battle world comes to an end with the premonition from Emma Frost, that a battle against doom is coming and that Logan will be on the front lines. What happens after the fight? Well it seems that he will be one of the few to come out of Secret Wars with knowledge of what happened.

Kinda annoying that even after all the delays in Secret Wars, this entry in the story felt a bit like filler. All of it was really just filling in some gaps in the story, piecing together all the elements that are going to be needed to finally take on Doom. The Characters from the original universes are building rebel armies, Thanos is off reminding The Thing what he has forgotten & Black Panther and Namor find some powerful tools.

The Battle at the Shield comes to head as Thanos shows up and demands to be incarcerated, but why would he do such a thing? Turns out this book is the more detailed and interesting version of events from Secret Wars #6. The battle obviously does not end well, but this book was well written and full of interesting sub-plots, so this was a good ending for it

The last battle of the Spider-Island Secret wars series. Flash, Parker & the other Avengers they have freed from the Spider Queen’s control by giving secondary mutations are taking a beating, there is only one option – Venom must make a choice, not Flash but the Symbiote can potentially save the day – but will it. A good end to this story, and a good story overall.

Things are certainly looking up for Parker in recent years. Sure Doctor Octopus may have taken over his body for a few years, but as a result he now has Parker Industries – and it seems that is now rivalling Stark Enterprises in scale. However Parker is still Parker and as such is more interested in using the ‘Power’ of his company to help others.

Like Invincible Iron-Man this does a good job of throwing a bunch of potential plots into the air, while not really making it obvious as to which they are going to be following first. I think this could be a good one to follow as long as it doesn’t play too heavily on the poor-man’s Tony Stark joke.

I guess if you really liked the Infinity Story Arch, these ‘What If’ stories are interesting – but if like me you aren’t that fussed they’re kinda pointless and worth skipping

This are all off the reading list because I am skipping all Star Wars titles until after the films release.