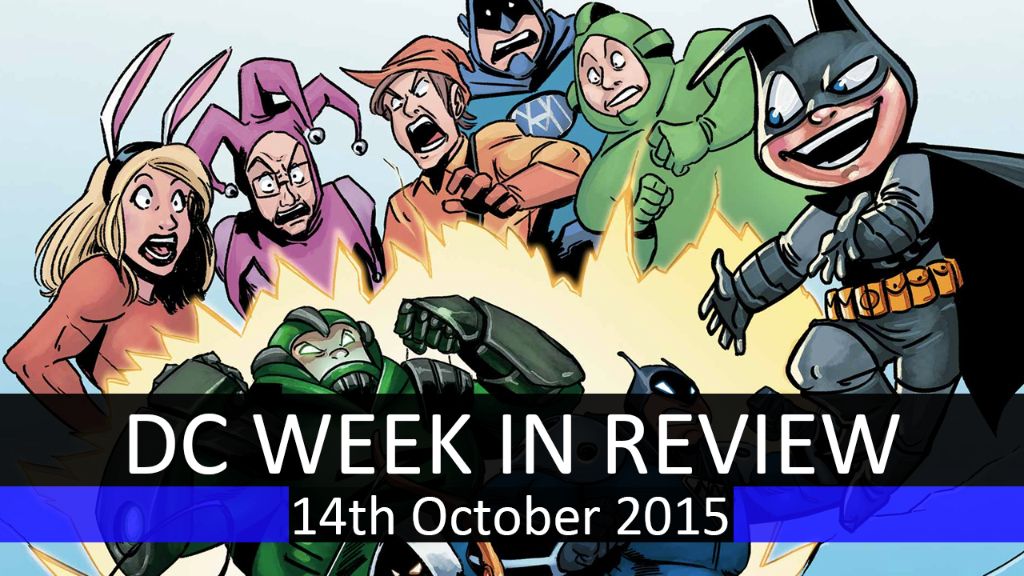 I love this little book. I hope Bat-Mite gets another series after this one ends. This was an interesting issue as it introduced me to a bunch of other characters that really should get more of the limelight, there are more than just the Justice League in the DCU

The story continues with Grayson following up on the list he was given by Cassandra Cain in the first issue, fortunately that takes him to the flat of Harper Row (BlueBird). He is just in time as Harper is attacked by a follower of “Mother”, while Cassandra Cain chases down the attacker he stays to help Harper.

It is here he also is joined by Red Robin & Spoiler (thankfully, Grayson says what we are all thinking about the number of teenagers in costumes these days) – but we’re still no closer to knowing who “Mother” is and what it has to do with Grayson’s first encounter with Scarecrow

With Clark Kent now public as Superman & Jim Gordon as Batman, it’s safe to say they do not see eye to eye. After coming into Batmans turf and nearly causing a war, Superman is persona non grata in Gotham.

So, picking up a few toys from the batcave he has gone underground to investigate who is behind it all. It’s not long before he finds himself having his ass kicked by Vandal Savage.

Fortunately while Batman is not helping, the Bat-Family will. He finds himself helped in his investigations by Batgirl, Grayson & Red Hood. But can they succeed without Batmans help?

Things we’re going well for Gordon at the end of the last issue and this issue picks up with him stuck in a blast furnace, with little hope of escape. This is comics though, so you knew he was going to.

His investigation of Bloom has pretty much hit a dead end, he’s out numbered in the fight and still not used to flying solo. Thankfully he is soon given backup, the Bat-Bot has been given an upgrade in the form of an autopilot mode.

But when the fight is over things go from bad to worse as he finds himself meeting with the head of Powers international, she informs him that he his being retired as Batman, but is he ready to step down from the roll?

I understand they had to do something to help expand on the catwoman story, to build her character to be something more than just anti-hero that sometimes Batman has the hots for. I gave it a serious shot, but personally making her the head of one of Gothams crime families isn’t really working for me.

This issue sees her playing matron a little bit once again, helping a friend who just became head of a rival family by getting revenge on Black Mask for killing her father.

None of this story interests me, apart from perhaps Cobblepot, his characterisation in this is spot on for me. That said this series is off on the not reading list.

It has been a year since Planetfall on Earth-2, society is starting come back together steadily. This is in crisis however as the last orbiting generation ship they came in, Overwatch-One, is falling out of the sky on a direct path for Neotropolis.

It falls to Batman, Superman & the Flash to try and get its stabiliser back online. With Superman only partly powered due to the red sun having only just set, Batmans exosuit not capable of the speed needed it eventually falls to The Flash.

This Flash however is still only just getting used to his powers, along with the responsibilities and fame that come with them. However with some fast thinking he manages to at least get the ship stable enough to buy them some time to ask the important question – who caused the problem in the first place?

Unlike Catwoman, the effort being put into building Harley Quinn into being more than just sidekick of the Joker is actually working. While the crazy is still there, it’s a strangely believable kind of crazy. Getting her out of Gotham was a really good start as it opens up a lot of new stories where she is not having to fall back or for no reason ignore the various other characters of that city.

That’s not to say she is alone, being that she is being a Merc/bounty hunter of sorts at the moment it was only natural that she would bump into DC’s best known Merc – Deadshot. What makes this issue for me is there is a moment at the end where Harley is talking to the Mother of the woman she has been sent to retrieve and reminds you that pre-Joker she was a psychiatrist, as she tells her exactly what she needs to do to help get her daughter clean.

Obviously being Harley this is done while she is topless, also followed by a threat to kill both of them if the mother didn’t pay up – but it shows that under the loopy are brains.

JLA is one of the stories taking advantage of the DC ‘Content of Continuity’ where after convergence writers were allowed to tell any story they wanted without having to worry about where they fit in the main timeline. This is why despite in this comic Superman is still fully powered and Batman is still Bruce Wayne.

The Kryptonian god Rao is still hovering over New York, while providing his blessing over the world. However while the UN seems happy to open the borders to Rao and his prophets, others are starting to questions his motives. While Batman and Superman are investigating different angles, Cyborg is helping both of them. While that is happening Green Lantern finds himself stuck a quarter of a million years in the past on Krypton.

He ends up coming face to face with the Great God Rao, but something is not right. This Rao is a 300 year old man, in the midst of a civil war and does not show any of the power that the one on modern earth does. However both sides of the timelines soon start to uncover dark secrets, like the fact that Rao is genetically altering people to worship him and that he may have done the same to Kryptonians long ago. Meanwhile on ancient Krypton, Green Lantern learns that this belief gives Rao certain abilities that may explain why he now needs earth to believe in him.

Unfortunately Rao knows he’s been rumbled, so what happens next?

What do you do when you’re trapped in a small french town, stuck in a temporal distortion that seems to have pulled in every war that has ever passed through its borders? Simply try to stay alive!

Vandal Savage knows this town, being immortal he was here during World War 2 and finds himself captured by some american soldiers he pissed off on his first time round. Soon saved by Batgirl they escape into the woods to attempt to regroup with the others. StarGirl has been knocked out of the sky and seperated from her power staff – thankfully she is being helped by the german world war 1 pilot that shot her down.

Meanwhile Steel and Robotman find themselves in the middle of the battlefield facing down DC’s Creature Commandos. 2 against 6 is long enough odds, but then that 6 consist of Frankenstein’s monster, a vampire, a werewolf, a gorgon, a zombie and a different android things are not going to go well. Against all reason they manage to survive, only to finish the issue under attack from OMAC.

Red Hood & Arsenal find themselves in Gotham on the tail of the Villian UnderBelly. Being a personification of all the dark and evil of the underworld, it obviously started here.

Basically this whole episode is one big action scene as the pair, helped by Bat-Bot, take on the Underbelly. It is not a simple fight as he simply is not human, but eventually they are successful and in a way that lets you realise that under his goofy exterior, Roy Harper is a genious. However the wrap up of the episode is a bit of character building for Red Hood as (in this book) it is the first time he learns that Bruce is still alive but without any memories. it turns out Jason spent some time at the community center bruce is helping at.

The Cliffhanger for this issue however does not give me much hope for the next one as it involves ‘Joker’s Daughter’ a terribly contrived character that I would much rather they did away with and forgot they ever created.

This is an interesting little idea, basically this Superman is from a reality where the timeline is further along and the opener for the issue shows that by having him in the background of the battle against Darkseid ready to step in if the Justice League not been able to handle him. They obviously were and Superman returns home to Lois & their child Jonathan.

I am interested to see where this one goes after this first issue.

Constantine has never been a character I have read regularly, occasionally he has some good arcs but this one didn’t grab me

Another of those title that showed up on my list of DC releases for this week – who knew?

There is nothing wrong with Starfire on the whole but I just didn’t like the first few of this series.