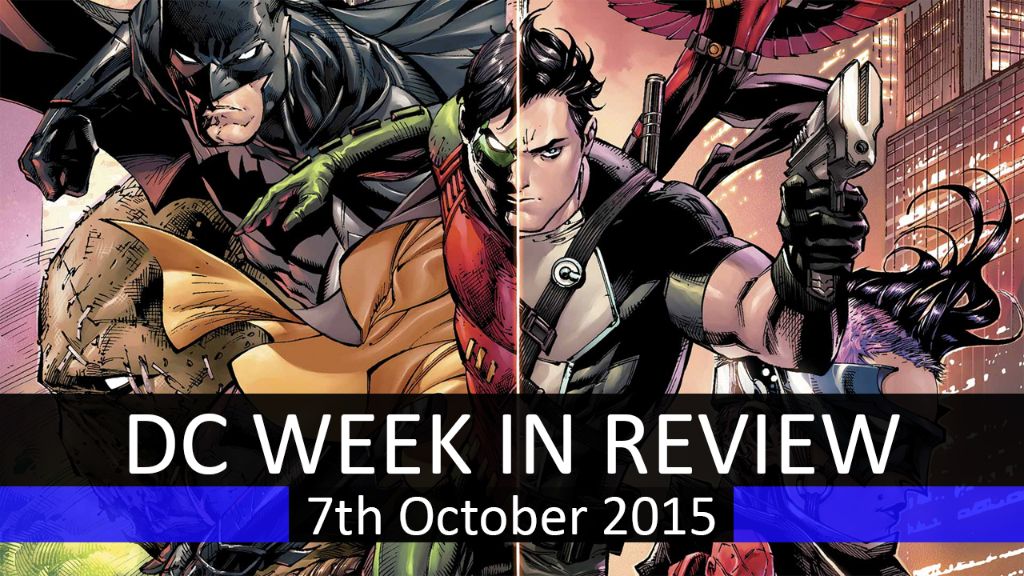 Continuing with the arch of Clark Kent being publicly outed as Superman, this issue picks up with him being more of a reporter than a hero. Investigating a biotech company he believes is involved with Wrath (The enemy that he has faced since convergence), he has gone undercover. What he discovers is a lab experimenting on people infected by the black goop that has been seen in previous issues – but why?

A solid issue, even if I was still shaking my head at the fact he suddenly has a ‘light refraction mask’ to help hide his identity, as if to admit that glasses were a bit dumb.

Start of a new massive story arch, a follow-up to incredibly confusing Batman Eternal. This one has kicked off well, centered around a mystery attacker out to get Dick Grayson for reasons unknown. By the end of the issue you are left with a lot of questions that need to be answered – but with Bruce now having lost all of his memories getting those answers is going to be difficult.

The battle for Gotham continues as Brother Eye brings in the heavy hitters to help – but this is Gotham, even with a robotic Superman to face they do not back down. Tim and Barbara track down some equipment to take the fight back to Brother Eye – the Batman armor the current Batman is using (with a few upgrades).

The issue ends with them heading to Wayne Manor to find another of Bruce’s toys – but what could it be if he already had the Metal Bat?

The Aliens that have been looking for Cyborg have finally started their invasion of earth. Their starting gambit is to infect anyone with cybernetic enhancements. Thankfully just as he is being overrun Cyborg gets a little assistance from the Metal-Men.

The back end of this episode made me realised that I don’t know enough about Cyborgs recent history – as it seems to play on animosity between Cyborg and a character that shows up, in order to make a reveal shocking. Without that context it was just kinda meh.

Jim Gordon is starting to settle into the role of being the Robo-Bat, but there is still some doubt in his own mind due to the size of the Bat Shaped Boots he is filling.

For one his doesn’t consider himself up to the Justice League’s level of epic – However it seems the league agree but after trying to see if there is anything of their Batman left, they have no choice to recruit Gordon. Is he up to the challenge?

Hal continues his adventures as the last remaining Green Lantern in the main universe. While is is still technically a fugitive from the corps, he does want to find them, find out where they are or where they have gone. However he has a sitation to contend with first, he needs to find out and stop whatever is causing that.

When he finally works out what is the cause he immediately sets off to deal with it, leaving the ship and his passengers behind in case he does not return. The book ends with a fight between Hal & Black Hand, but is Hal out of his depth?

With Sinestro still trying to consolidate his power in the vacuum left by the missing Green Lantern Corps, he has hired Lobo to take out members of the other Corps.

This issue pits him against a group of Red Lanterns and it’s a bloody and gruesome battle and the issue is well worth reading.

Kyle Raynor is stuck with the group known as the Omega Men. They are outlaws of a kind within their sector of space and they are forcing Raynor to go along with their plans.

This issue see them arriving at the Temple of Omega, so that Broot can take a shot at retrieving the Key of Alpha from within the first stone. As an exiled priest of temple this may be his chance at redemption, however the priests have double crossed them.

I will admit that this story is being a little too slow in getting to the point, this is the first issue where I have felt they should start explaining a few of the plot points rather than adding yet more. Let’s hope that changes soon.

The character that nobody gave a crap about in Convergence, gets his own series and quite frankly it was not all that great a story – I wouldn’t rush out to get this one and unless #2 is damn impressive expect it to drop into the not reading list fairly rapidly.

I’ve pretty much lost patience with Green Arrow, his stories just don’t really grab me at the moment – I might drop back in when they start a new arch

I didn’t even know this was a thing, it just appeared on my list of DC releases this week