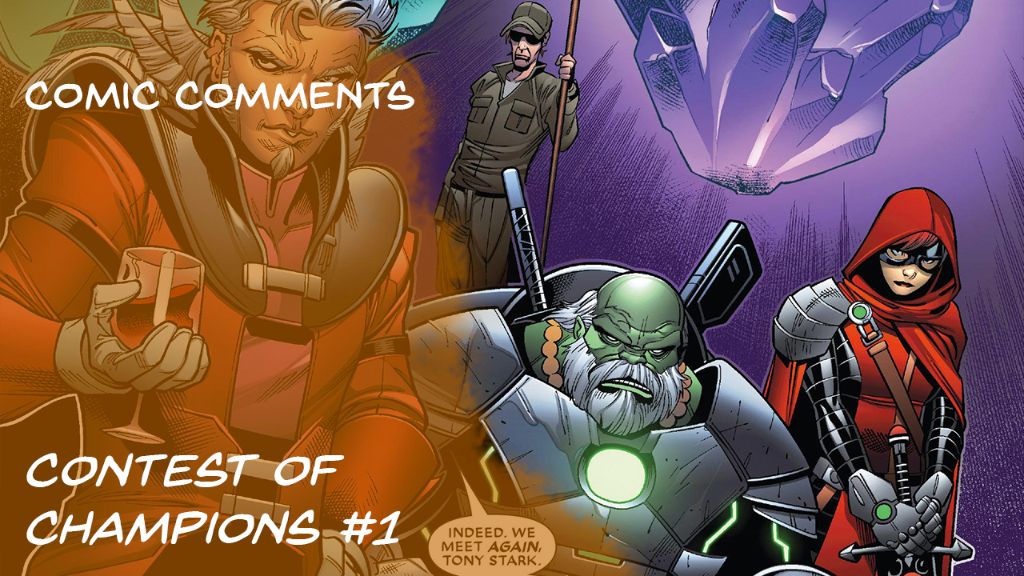 Previous Comic Knowledge Required: All you really need to know about Contest of Champions is that, a) it is primarily based on a mobile phone game and, b) that it is set on what appears to be the remnants of Battleworld from Secret Wars.

Basic Synopsis: The Contest of Champions has started and the Collector has his summoner. It’s up to the Maestro, an evil future version of the Hulk, to select the greatest and strongest team of heroes from across the Marvel multiverse to battle against the team of an unknown competitor.

My Thoughts: Considering this comic series is basically a spin-off from a mobile game, I did not go in with massively high expectations for it.

The Collector has once again but called into some form of bet that involves having a ‘Summoner’ putting together a team of heroes, to take on the team created by the other person’s Summoner.  The other party is not explained in this issue, but I’m sure it won’t be long before it is.

The issue starts with the one of the Maestro’s team being collected and what is interesting about this for me is that it starts with a character I know nothing about, The Outlaw, who is apparently a british version of the Punisher last seen in the 90’s. Considering they have the marvel Multiverse it would have been too simple to kick off with one of the well-known names.

Once collected hes is thrown into a fight against someone much more familiar, Venom, however a version of Venom that is still a bad guy and in his universe managed to kill Peter Parker. Overpowered, it is a pretty good job backup soon shows up in the form of Gamora, while she keeps Venom busy Outlaw has to help another member of his team, a version of Iron Man.

He is having his ass handed to him by another character that I have not seen in some time, Joe-Fixit, a personality of the Grey Hulk that worked for the Mob. I always loved that character so it was a shame to see him beaten, and I hope that is not the last we will see of him. However they really have run with the idea of all the multiverse to select from as the combatant is Devil Dinosaur & MoonBoy – but from a Universe where they are part of Hydra.

After a short fight the team is declared the winner, and that is when they are introduced finally to the Collector & Maestro, as well as Stick (the guy who trained DareDevil) and Guillotine (a newly created character).

The rest of the issue is given over to giving some backstory to Guillotine, as well as a side story about the fact that someone has noticed that some people have gone missing and is investigating that fact.

Recommendation: I am going to actually say this could be worth following based on this issue.