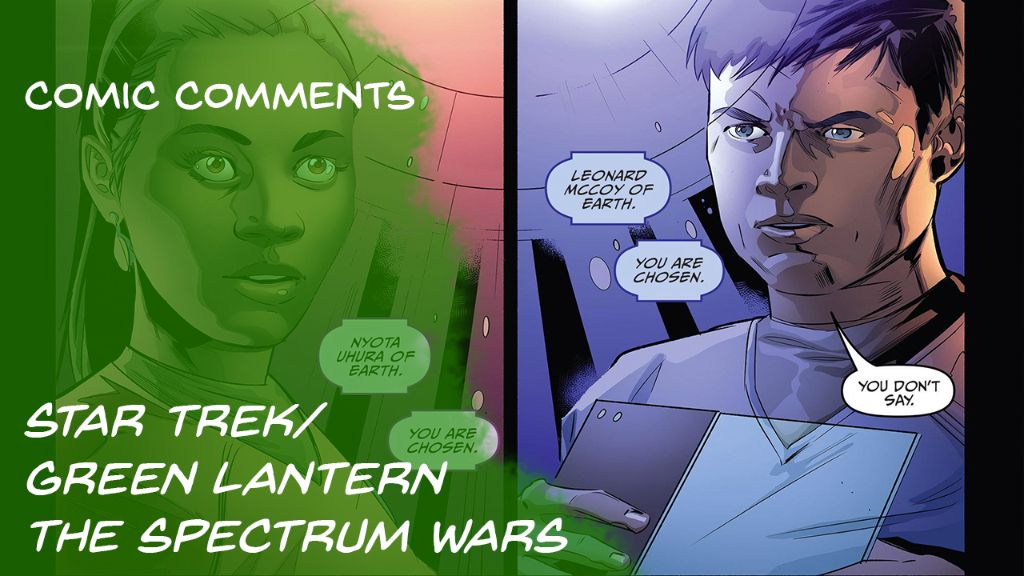 Previous Comic Knowledge Required: Hrmm – well on a basic level, Shit got real bad in the DC universe. Nekkron, Head of the Black lantern corps had pretty much destroys all the other Lanterns, Power Batteries and everything else.

As a last gambit, Ganthet pulled a set of rings plus a few remaining lanterns (from the various corps) into a new Universe – The Star Trek universe!

Basic Synopsis: Things heat up for the Hal and the Crew of the USS Enterprise as the heads of the Yellow, Red & Orange Lantern corps find out who got their rings in this universe.

My Thoughts: This issue was a bit exposition heavy but it really needed to be. Carol Ferris, the Star Sapphire, confirmed that Ganthet’s final gambit may not have been as useful as hoped – as it seems Nekkron was not left behind and has followed them into this universe.

While Dr McCoy attempts to use his Indigo ring to heal Saint Walker, the Blue Lantern and Scotty is studying his scans of the Power Rings – the Enterprise receives a distress call from a starbase under attack from what could potentially be other Lanterns.

Hal & the Enterprise rush to the aid of the starbase and arrive to find both the Red Lanterns (Atrocitus/Glocon of Gorn) & the Yellow Lanterns (Sinestro/General Chang of Klingon) going to town on each other. The art of this is very cool indeed.

The issue ends with the usual fight between Sinestro and Hal – but Sinestro manages to take out the crew of the Enterprise at which point Hal takes the Captain’s seat and forms a Gigantic light construct version of the ship.

Recommendation: Im kinda enjoying this one, so its worth a buy if you have read along – if not unless everything goes wrong in the last two issues, it will be worth picking up as a trade