As I’ve already mentioned in the past I am a bit of a comic fan, but I’m also unfortunately rather a lazy one. Once upon a time I would be a regular at the local comic store, but those days are long gone.

However I am now in the process of rebuilding my graphic novel collection to bring me fully back up to speed with as much of the DC & Marvel universes as possible.  Last year I picked up a whole pile of ones I needed including a few surprising ones that I did not plan on picking up.

But that’s where the problem hits home you see, even being out of the loop for only a few years I’ve completely lost track of what forms part of the core universe for each. Obviously the newer titles are important, but obviously some of the older ones will have by now been retconned.

While this will not stop me wanting to read them, it would be good to put them on the back burner to get the important ones out of the way first.

For example, Spider-Man: Chapter One, which was supposed to ‘retell’ Spidey’s early years and an attempt at an interpretation of the character to modernise it. That series itself cause a few alterations to the Spider-Man cannon at the time, but I am aware that this series itself has been effectively subtracted as part of the Spider-Man lore so that its changes are completely undone.

Thankfully however there has been some help for me at least when it comes the DC Universe. While Sony were working on DC Universe Online they had their own archive library, to be able to get all the characters and lore right for the game. While the library was very extensive it seems that they also had an internal ‘Essential Reading’ list.

Comic fan site Comics Alliance managed to get its hand on this 5 page reading list, which is incredible sight for people like myself wanting to catch up or anybody looking to get into comics properly for the first time. Below is a copy of the first page of that list, the rest of the pages can be seen over on their site http://www.comicsalliance.com/2011/01/11/reading-list-dc-universe-online/. 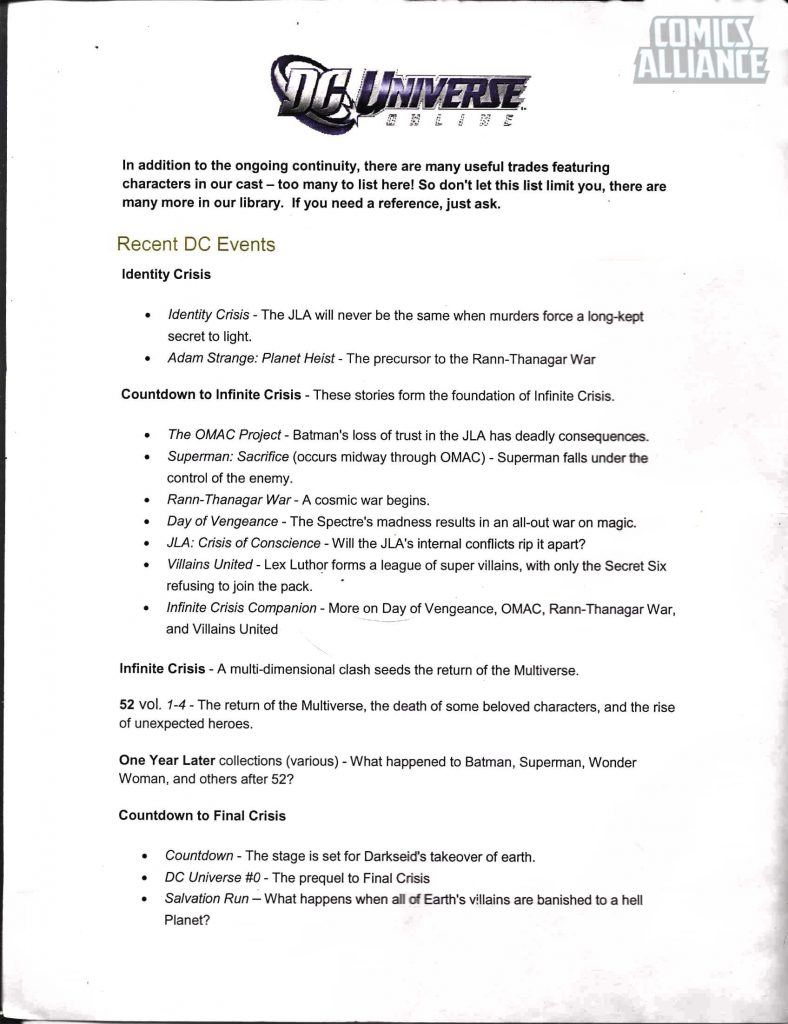 This has been saved to my machine to make sure I will be able to check it when needed. I have not used it just yet as I already have an active wish list set up that i want to clear off first (http://www.amazon.co.uk/wishlist/1QEGSVGPJQCN0 for anyone interested).

Now all I really need is a similar list for the Marvel Universe…..Hmm, I wonder if the guys at Gazillion or Cryptic have one? I shall have to enquire!