Maybe I am just getting old, but more and more things seem to make me feel nostalgic lately. It may also have something to do with the next generation of gamers and developers rediscovering lost formats and franchises.

One such developer is TinMan Games who for the last few years had be doing a wonderful job of bringing the ‘choose your own adventure’ style books back into the public view.

I loved these as a child, I would read and reread dog-eared fighting fantasy books trying to find every possible version of the story. Sure I cheated a bit but that was part of the fun.

Their latest book has just been released and I have been reading/playing it during my commutes to and from work each day. It has taken me longer to get to the review point than it usually would though as, either this book has a lot of possible ways to die than their earlier books or I have just been making some terrible choices.

The story starts right at the beginning, with your birth – well emergence as it turns out that you are a clone and have simply matured. After what seems like a pretty sucky life in an orphanage, at 16 you are sent to the Silene monastery. It is here that, while things don’t get any less shitty for you they do at least start to get interesting.

Depending on your choices, or how lady luck feels like treating you, there are many weird and wonderful things you could find yourself doing along your way. 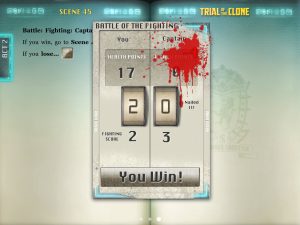 I have also been killed in that same war, lost a fight to those bounty hunters, been selected as a sacrifice for an unspeakable creature and at least once had my been killed by my bravado.

At the end of each story section you story options are put before you. If they are simple choices you will just have to pick, but for things such as battles you will have to roll the dice to get the outcome.

Thankfully there are some digital dice built into the game, as well as it keeping track of all your character stats and inventory. This was always the hard part of these things as a kid. However it was also were I would do the cheating, the outcome of a fight is easy to control when you’re the one scoring it.

TinMan Games must have thought of that, as right at the start of the game you are given the option to play properly or to cheat. Choosing the later will grant you extra features such as the ability to undo selections and go back in the story or even to switch to free choice mode, allowing you to select the option that you want regardless of the true outcome.

One feature that is new and very different though is that you have the option to play this story with narration, turning into a kind of interactive audiobook. Being that this is a sci-fi comedy story, naturally Will Wheaton has been brought in for narration duty.

I liked the audio personally and bore with it to begin with, but kept getting ahead of him as I would have to look at the screen to make my choices anyway. What I would have liked instead would have been the option to make my selections using the inline controls on my headset. With that functionality it world have been perfect.

Overall then, TinMan have managed to a brilliant job on this book, the gameplay is smooth, the audio and artwork are well done and even the narration helps pull the game forward if you can stick with it and not read ahead.

So I am going to recommend this to you all, it is worth checking out.