Gaming sure has evolved a lot since the first release of Toki Tori, while I did not get round to playing it till its revamp for the Wii & PC it was originally a GameBoy Colour release. I loved the puzzle platform game-play of the first, the had that perfect balance of frustrating challenges yet simple to pick up nature.

So when the sequel released last week for the Wii U, I was right there in the E-Shop to guide this cute little yellow bugger around his mazes again. However Toki Tori the bird is not the only thing that has held over from the GameBoy Era, and that in this case is a very good thing indeed.

When you have downloaded and fired the game up for the first time, you will find yourself thrown straight into the action. No title screen, no annoying ‘Press Right to go Right’ tutorial & no story recap. You simply fall into the screen and are left to your own devices.

Well, while I say there are no tutorials, there are but not in the current sense of the word. Instead the first few areas that you will explore with Toki Tori are very tightly designed to teach you what you need to know with a bit of experimentation, as well as the odd visual cue from the wildlife around you. 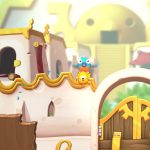 What makes that process a little more streamlined is the fact that Toki Tori himself has lost a few skills since the last game. Gone are his teleportation, bridge building and ice gun abilities, all he has now is the ability to Stomp or to Chirp. What is impressive is that this streamlined ability set has not resulted in the puzzles being made any simpler.

The reason for that is both abilities have nuances that you will have to learn. How they interact with the world around you and the creatures that inhabit it with you are key to the puzzles in the game. No two creatures will react exactly the same to you and there are even times when the environment will change how they react.

For example. Stomping while next to a certain type of bug will usually cause it to roll away from you, however if the roof is low enough it will instead cause them to bounce up to walk along it for a while. The sheer variety of creatures and combinations mean you will still be learning all the way to the later stages of the game.

Toki Tori’s Chirps also have a secondary set of abilities that you learn along the way. There are a handful of ‘Songs’ that you will pick up by noticing other birds singing them. These are activated by tweeting the right combination of small and large chirps can vary from rolling back to the last checkpoint, to causing an eagle that will swoop you up into the sky above the world map as a way to quick travel.

Speaking of the world map, this is how the puzzles are linked together in Toki Tori 2. As you explore you will find gateways & caves that you can pass through to other zone. What I really liked about this is that as long as you can solve the puzzle to get to them there is nothing else gating your way. I found myself a few times backtracking when a puzzle just made no sense to me at that time. It gives an impressive open-world feel for this 2D puzzle game.

One thing I also want to commend Two Tribes on before I get to much further into this are the visuals & music. This game looks incredible on the big screen in HD, all the little animations and effects making the world really feel alive. Also quite frankly the soundtrack could only have been more fitting if they had found a way to deliver it shaped like a little yellow bird as well.

Being that it was the Wii U version that I was provided to review, I want to mention some of the features that make use of the gamepad as these have been done properly. They add to the game nicely without feeling like the game would be affected by their removal, which is good as the PC version is due out later this year.

The first is the offscreen play, where you can continue playing the game even when someone else has hijacked the TV. I have actually used this a few times when things challenging, paying attention to something else can sometimes clear your mind just enough to see the solution I find.

When not being used as the main screen, the Gamepad will display an interesting overview screen. At the top of the screen is a simple set of icons that show you the ‘songs’ that you learn so far. Useful for memory challenged people like myself.

However at the bottom is a set of place markers for points of interest in your current stage, however these are simply there to let you know if you’re going it roughly the right direction. It only shows the horizontal position, it doesn’t include a depth guide.

At times that can be frustratingly vague but I think that simply added to the challenge of the game. I know something is there, but how the hell do I get to it? 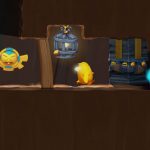 Overall then, Toki Tori 2 is one of that rare breed of sequels that doesn’t merely improve on the previous game, it leaves it well in the dust. Which is rather damn impressive as the first was a great game in its own rights. I would go as far as to say this is one of the best titles released for the Wii U so far.

It has just the right combination of frustration and reward in its challenges. You will encounter puzzles that will stop you in your tracks and the pure joy of finally solving them will make it worth it. The fact that is all done with a brilliant visual style and relaxing soundtrack will soon calm you.

A must have for anyone with a Wii U.