Everyone by now knows that I am a bit of a nerd and have always loved comics. Sometimes I can get a bit snobbish about it as well when it comes their transition to other media.

Green lantern for example was an absolute travesty & Superman returns should have been shot on sight with a kryptonite bullet. However the one that makes my blood boil the most was the 1995 Judge Dredd, not because it was a bad film but more because this was a lot of peoples first introduction to the character.

Fortunately there is a new Dredd film out that is getting some good reviews (I have yet to see it) that should help wash away the memories of that film.

However that is not the only Dredd related project out at the moment, TinManGames have a new digital adventure book featuring the Judge.
Judge Dredd: Countdown Sector 106 puts you in the boots of the Judge as he brings the law to the streets of Mega City One.

If you haven’t played one of TinManGames’ Digital Adventure books before let me explain them. When I was a kid (which admittedly quite a way back) there were a series of choose you own adventure books.

How they worked is that as you read the book every few pages you would be given a choice or asked to play out an event like a battle. Based on the outcome of that event/choice you would turn to a specified page to find out how the story continues. 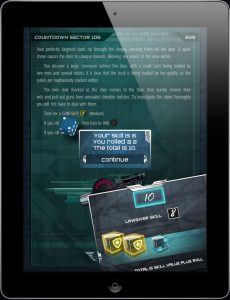 What TinMan have done is replicate this format for smart phones and tablets, and done so incredibly well. It offers all the adventure aspects of the original format without the hassles of having to keep you own note on health and stats.

Through an unfortunate series of deaths and retirements Sector 106 had found itself short on experienced judges. To solve this they have transfered in the legendary Judge Dredd to help cover the shortfall.

After the initial section of the story where you first arrive at the section house helps you set your stats (and depending on choices learn some things that might come in useful later) you get to hit the streets.

Here you will discover a very well written representation of Mega City One. Juvenile delinquents, hardened criminals & even the odd dinosaur, Dredd will find himself having to handle all of them. The characters and humor are all what I have come to expect from that world.

There is a core story revolving around a series of seemingly throwaway bits of junk, but I don’t want to spoil that for you so I’m saying as little as possible about them.

The great thing is that there is no way you will experience this whole story on one read through, and even if you do hit the same segment in following readings then you can usually play it out differently as well.

In order to let you know how close you are to having seen it all there is a full set of achievements, a list of all the perps you will have met & a gallery of all the impressive artwork you will have seen along the way.

As we don’t put scores on reviews here at 8bitalliance its time to wrap up.

Moving gamebooks to the digital marketplace is a brilliant thing. It means a whole new generation will get to enjoy them, while my generation gets to relive their youth.

What makes this all the better is that the writing, artwork and even pacing of this gamebook are absolutely spot on. Its always a good sign when you walk away thinking that it could stand up as a normal book without the game aspect.

If you have an iOS device then you should certainly pick it up now, it is better suited to tablets but works very well on the phone as well. The Android version should be out later this year.