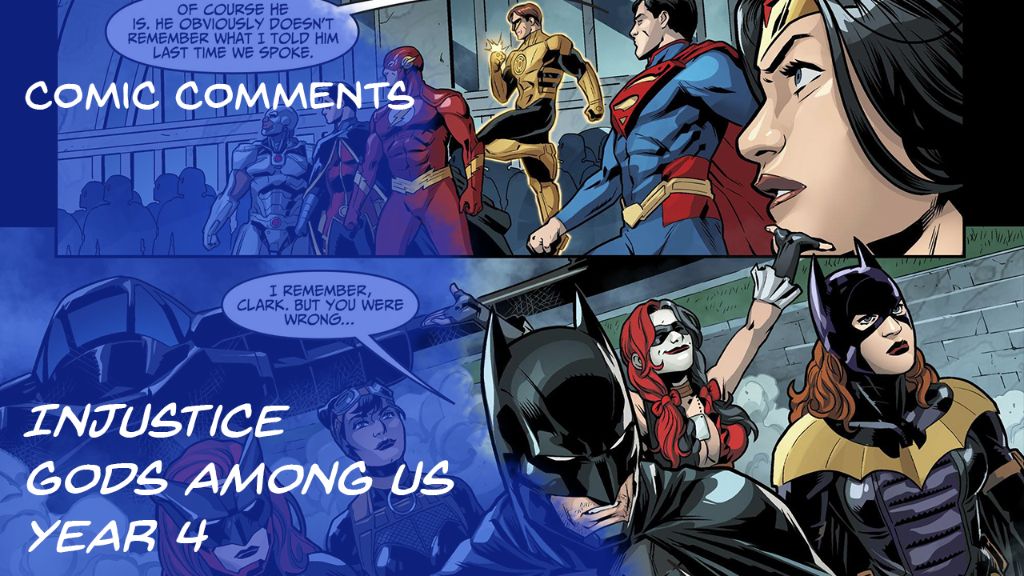 Previous Comic Knowledge Required: A general knowledge of the DC Comics would probably be useful for an idea of who is who, but you could pretty much get away with just reading Injustice: Gods Among Us – Year’s 1, 2 & 3.

Basic Synopsis: After so long with no interest in the actions of humanity, Superman’s actions in taking control of the world has pissed off Zeus and the rest of the Pantheon. Forcing the Amazonian Army to join with them against Superman, Wonder Woman is left torn as to which side she will take, meanwhile Batman has to find a way to use this to his advantage. But what has caused Zeus to suddenly take an interest in the affairs of earth?

My Thoughts: I am liking the way that Injustice is picking a theme for each of its arcs, it really helps ground the story that could otherwise spiral out of control.

That’s not to say it’s completely grounded, this is a world where Superman and the rest of the Justice League are pretty much in control, the Green Lanterns have been wiped out, Superman was a Yellow Lantern and the Joker nuked Metropolis.

What was good about this year aside from the interactions between the Justice League and the Pantheon, was all the undertone for the greater story of this year.

There are characters within the Justice League that seem to be questioning whether they have gone too far. Lex Luthor has been subtly working in secret on something, as well as assisting the insurgency. Hal Jordan, now a Yellow Lantern, starting to worry about the state of Superman and some of his attitude and decisions. Even the animosity between Flash, Cyborg and Robin could be something that becomes interesting.

The way it wrapped up this year was a bit abrupt, but the hints towards the theme for Year Five were certainly interesting – if I have read them right I can not wait to see what it brings.

Recommendation: This is one of my personal favourite series at the moment, as it puts a new spin on all the characters because it does not have to worry about fitting into the rest of the DC Universe – well worth a buy as a result.