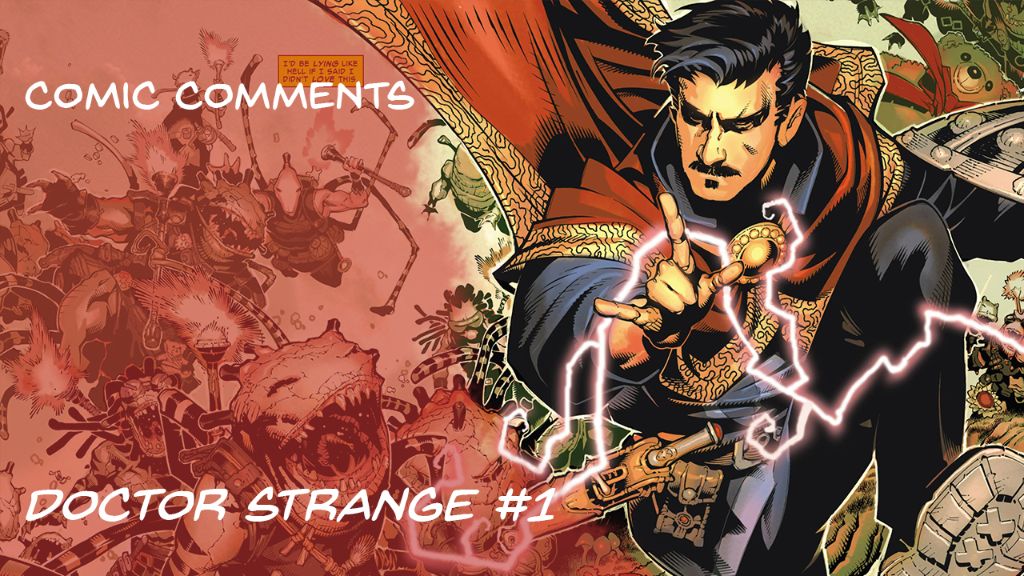 Previous Comic Knowledge Required: Dr Strange is the Sorcerer Supreme of the Marvel Universe, the front line against Mystical attacks from other dimensions.

Basic Synopsis: The life of a Sorcerer Supreme is a strange one, one minute you’re defending the soul of a sleeping child from demons from another realm – the next you’re walking through your own shadow into a magical bar to meet up with the other big hitters in the Mystical world.  But is there a price to be paid for this magic and has Dr Strange been paying his Tab?

My Thoughts: I have a personal love of Dr Strange, due to the fact that he is so very different from the majority of the Marvel Universe.

This being the #1 Issue that follows on from Secret Wars, as a result a lot of this issue is about setting the tone of the series for new readers. They do a very rapid overview of his origin, give you examples of the kind of things he regularly does, all while weaving in what will be the overarching story for the start of this run.

It starts with him fighting off a soul-eater demon invasion within the soulscape of a small child, the battle is visually impressive and gives you a solid idea of his power. After doing that you are treated to a view of how Stephen Strange sees the world, with mystical creatures inhabiting it much like random animals in the normal world.

After dealing with another little pest in the form of a Psyche-Leech, he continues on to meeting of the great and good of the marvel mystical world including Doctor VooDoo, Shaman & Scarlet Witch. Over a drink they catch up on the current events including the fact that there seem to be a lot more demons in places they would not normally be lately.

This is when the idea of the cost and balance of magic it discussed, particularly with regards to Dr Strange himself – Monako, The Prince of Magic questions whether all his work with the Avengers might be tipping the tables the wrong way round.

The issue wraps up with the revelation that there are some bad things going on in other dimensions, as we see the Sorcerer Supreme of the 13th Dimension for some form of techno-wolves…a sign of things to come

Recommendation: This is really going to be a love/hate comic, the art is great but the Mystical side of Marvel can be a bit hard to get into. If you want something different give this a shot.