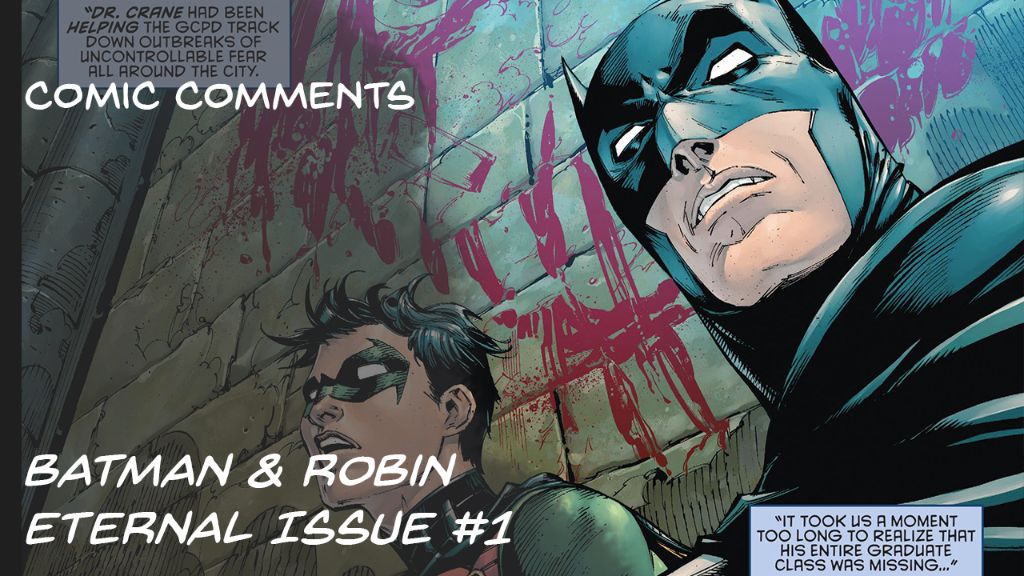 Previous Comic Knowledge Required: I am going to say that quite a lot of prior knowledge is going to be needed for this one, primarily last years 52 Issue series Batman Eternal. This was one hell of a confusing series, so I will point you in the direction of the Comicstorian if you want to know more about it (Batman Eternal Playlist).

Basic Synopsis: On a quick mission that brings him back to Gotham, Grayson is attacked by agents of a Villain referred to as ‘Mother’ which leads him to a mystery surrounding all of the Robins.

My Thoughts: When I picked this one up, I will admit it was purely because it is a sequel to Eternal. Now I am not sure they will actually be related in more than name, but I am sure that it will be quite an interesting story.

The story started off fairly light hearted with Grayson, Red Hood & Red Robin taking out a minor villain with ease before Grayson goes off to deal with the mission he actually came to Gotham for. It is here that things start to spiral, while Grayson is distracted by the last time he was in this building as Robin he is attacked.

Barely escaping he is shortly attacked by Cassandra Cain, the first time she has been seen in the New 52 properly. After their fight she simply hands him an pen drive, an old format that Batman used to use.

Returning to the BatCave – it is this drive that has the final secret of the issue, a list of all of the Bat-Family and a link to the villain ‘Mother’ – as well as a hologram revelation from Batman.

Recommendation: I might have to say that unless you are following on from Batman Eternal, I would wait a few issues until it starts to show if it’s going to be a good series.