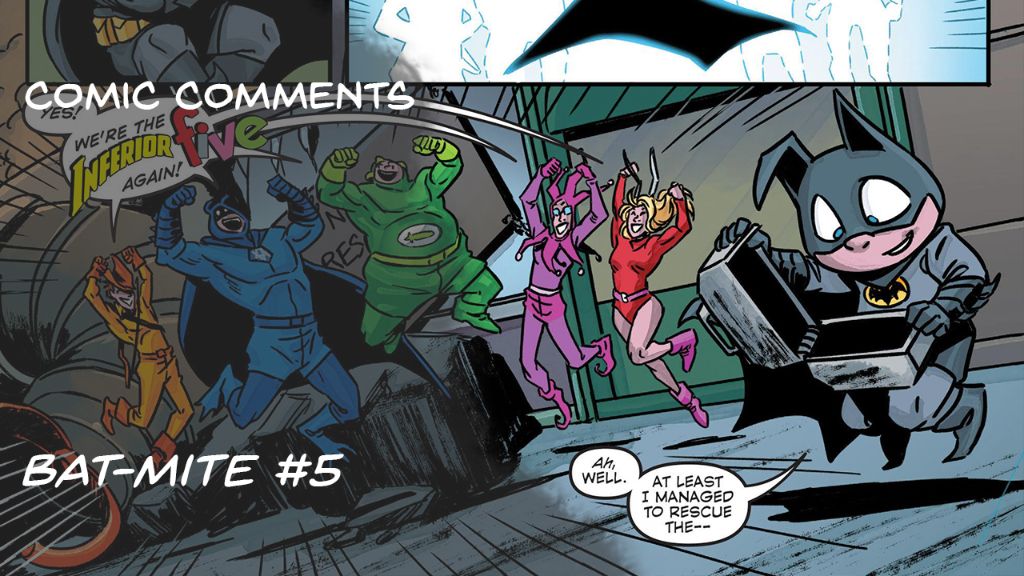 Previous Comic Knowledge Required: Basically there is not a lot that you really need to know. The point of Bat-Mite is really just meant to be an amusing little distraction. Bat-Mite himself is an Imp from the fifth dimension who possesses what appears to be near-infinite magical power, but in reality is highly advanced technology, using it to help whoever is his target superhero of choice – though generally causing more problems along the way.

Basic Synopsis: Bat-Mite’s ongoing battle against Gridlock (a supervillain who wants to stop the future from coming because the past was just better – seriously just go with it) continues, this time pulling into the fray a group for D-Rank heroes – The Inferior Five.

My Thoughts: The thing about the Bat-Mite series, and the reason I have been trying to keep up with it so far is the the fact that is just a break from the norm. It’s a reminder that not all comics need to be dark and gritty. Since being exiled from his home dimension for reasons unknown (probably just generally being a pain in the ass) he has so far teamed up with Hawkman, Booster Gold & Robin and picked up his own supervillain Gridlock.

This issue starts with him on his way to help out as the henchmen of Gridlock are attacking a film museum for unknown reasons, but are being taken to task by one of the worst hero groups in history – The Inferior Five! Thier powers are not great, such as Arkwardman whose ability appears to be clumsiness or  The Blimp who can kind of fly (if the winds are going the right way) but together they get the jobs done that are too low level for real heroes.

Turns out that what gridlock was after is the previously unseen pilot episode of Galaxy Trek, so that he can ensure that his is the first – and only – person to ever see it (its kinda his thing), so Bat-Mites only option is another makeover – turning the Inferior Five into the Superior Six – Seriously overhauling their powers.

After the new team takes the fight to Gridlock, and kicking serious ass, Bat-Mite and Tough Bunny realise that they can not stay this way. The whole power corrupts thing shines through and it’s clear that leaving them with this power would only end badly.

This issue wraps up with the reveal that the cloaked figures that initially exiled him to Earth are watching, and have decided its time to step pack in and deal with the mess that Bat-Mite is making.

Recommendation: As this is scheduled to wrap up next month I would say wait for the Trade, unless you can find all the issues at a good price